Duco Scratch protective film is extremely scratch and puncture resistant. It will withstand the impact of years of abuse from stones and weather. The protective film is guaranteed to remain optically clear, year after year. Originally developed to protect the rotor blades on the helicopters used in the Gulf War from the searing blast of the desert sand.

Clear Car Bra is your best hope in the never-ending battle against stone chips, abrasion, insects and environmental damage. The superior strength of Clear Urethane Car Bra, will fit your car like a glove. Clear Car Bra is the toughest protection film on the market today, and requires no special care or maintenance.

Clear Car Bra is optically clear and guaranteed for life against yellowing or cracking due to UV exposure. The protection remains invisible, allowing the manufacturer’s aesthetics to shine through unaffected.

Extremely high puncture resistance… so tough, in fact the paint protection film is tested by major Automotive Manufacturers such as GM, Ferrari, Ford and Nissan to withstand freezing temperatures, extreme heat, acidic oils and gasoline, along with attacks by stones and other abrasive elements

Primarily for use on vulnerable leading surfaces, and areas of likely contact, such as hoods, edges of doors, bumpers, side mirrors, rocker panels and body contour projections. 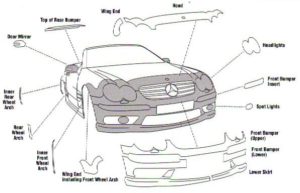